It’s a form a magic to bring the person into a particular spiritual path. The white magic can be easily found on a person as there would be cords only on the crown chakra and sometimes on the ajna chakra as well. These cords maybe coming in or going out. In other words the disciples may be connecting to these gurus ( cords going out) or gurus may be connecting to the disciples ( cords coming in). Many of the spiritual leaders would do special prayers to bring disciples into their path.

There are two levels of white magic

This comes from somebody who wants to make a name for himself by promoting himself in the name of God. He will ask for mantras to be recited on his name by his followers. He will be promoting himself by publishing his pictures and wanting to create groups and discipleship. Such persons will send cords to their disciples’ ajna chakra and control them spiritually and bring them in their path. 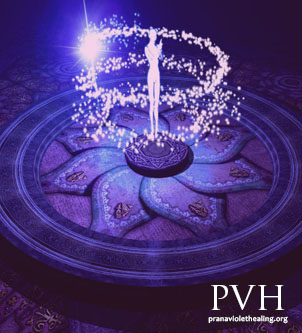 Example 1 : Some people who are searching for spirituality and they start going into the internet and when they log into any site and see the picture of the guru and immediately they can get cords in their crown chakra. This would pull them into this group because most of the time such groups are trying to increase their group members.

Example 2 : Some people go and attend a spiritual talk and then start getting involved in this group and cannot see what is right and wrong. They would start to worship this group leader like God, keep his pictures at home and pray to him. They would even be asked to contribute part of their earning to this person or group.

Example 3 : When they join this group they are not allowed to eat any food from anyone including their own mother saying that she is not pure as she not from this group. They have to cook themselves or eat food cooked by their fellow group members only.

Example 4: Many gurus would say that they will reborn again and their disciples must wait for them and many are waiting for many years and in some cases waiting even after many generations.

These are connections that come from spiritual leaders or gurus who have passed away but are still in the spirit form and still attaching to their disciples. Some of them may have been around for many many generations. In other words they are protectors of the organization which they once founded. Some of these gurus are still waiting to take next birth and even during this stage they are to be connecting to their disciples.

Example 1 : In our healing we have found many past lives’ guru that are still connecting to the person’s crown chakra. In such a case your soul could have been in this organization in your past life. You can have pain in the crown area of your head.

Example 2 : We have found many cords coming to a person from the inner world from a group of souls that you were once attached to in your past lives. In such a case you may have been their leader or a senior member in that organisation in your past life